Lowering the Green Premiums is the single most important thing we can do to avoid a climate disaster. By Bill Gates 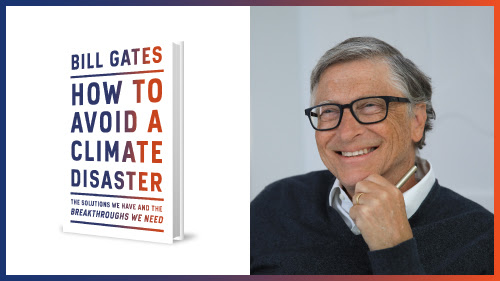 My new climate book is out this week. I hope that it gives everyone who reads it a better understanding of what we need to do to avoid a climate disaster. But if there is only one idea I want people to take away from the book, it’s this: We need to lower the Green Premiums.

I’ve written about the Green Premiums on this blog before. The term refers to the difference in cost between a product that involves emitting carbon and an alternative that doesn’t. For example, the current average price of jet fuel is $2.22 per gallon. If an airline wanted to swap that out for a zero-carbon advanced biofuel alternative, you’d have to pay $5.35 per gallon—a whopping 140 percent increase. That difference is the Green Premium for gasoline.

Green Premiums let us see which zero-carbon solutions we should deploy now—like solar power, which has a low premium in some places—and where we should pursue breakthroughs because the clean alternatives aren’t cheap enough. The bigger the Green Premium is for a particular product, the more expensive it will be to eliminate that product’s emissions—and the harder it will be to accomplish. Lowering these premiums is the only way to zero out emissions without making things significantly more expensive.

When I talk to presidents and prime ministers about their countries’ plans to fight climate change, I always urge them to focus their innovation efforts on the biggest Green Premiums. Lowering those premiums is going to take time, so we need to accelerate work on them right away. It’s tempting to focus on low-hanging fruit—like switching to electric vehicles—and we should. But easy wins aren’t enough if we’re going to eliminate greenhouse gas emissions by 2050. We need to work on the hard parts too, like cement and steel.

So, how exactly do we lower the Green Premiums? There are two levers that governments can pull: reduce the cost of zero-carbon alternatives or charge for the hidden costs of pollution. Ideally, any plan to address climate change does both.

Reduce the cost of zero-carbon alternatives

The world needs to get to zero emissions by 2050 if we’re going to avoid a climate disaster. To do that, we need to find ways to generate and store clean electricity, grow food, make things, move around, and heat and cool our buildings without releasing greenhouse gases. Some of these clean alternatives are already out there, but we need breakthroughs to lower their Green Premiums. Others don’t exist at all, let alone at a low enough cost for middle-income countries to afford.

If we’re going to reduce the cost of zero-carbon alternatives, we need a ton of innovation. Governments need to lead the way on a lot of this innovation, because they can invest in new ideas that might be too risky to be funded by the private sector. That’s why, in my book, I call on governments to quintuple clean energy and climate-related R&D over the next decade. The discoveries that come out of that R&D will feed innovative work in private companies around the world. Philanthropic funding can help, too, by supporting early-stage innovators who could take great ideas from the lab and turn them into new products and services.

It won’t be enough to just supply more innovation, though—we also need to create demand so these new products and services can get a foothold in the competitive marketplace. Companies can work with governments to fund the first few projects demonstrating a new technology or system works safely, which can prove to investors that the next projects are ready for them to fund.

Once a product is ready to buy, companies can then use their own buying power to increase the clean products they consume in their supply chains. Federal and state governments have this same power, too—they can do things like require the use of clean steel and cement in the infrastructure projects they fund.

The real value of government leadership in this space is that it can take chances on bold ideas that might fail or might not pay off right away. When an idea is in its earliest stages, the right policies and financing can make sure it gets fully explored. That’s especially important for zero-carbon alternatives that don’t exist yet. We need to try out lots of different ideas to find the ones that work.

Charge for the hidden costs of pollution

Today, when businesses make products or consumers buy things, they don’t bear any extra cost for the carbon involved. That carbon imposes a very real cost on society, though. Just think about all the money cities and towns are spending—and will spend in the future—to adapt to the effects of climate change.

Governments have the power to ensure that at least some of these external costs are paid by whoever is responsible for them. This would, in turn, create an incentive for companies to come up with carbon-free alternatives. By addressing the hidden costs of fossil fuels, it tells the market that there will be extra costs associated with products that emit greenhouse gas. And by slowly increasing the price of carbon to reflect its true cost, we can nudge producers and consumers toward more efficient decisions and encourage innovation that reduces Green Premiums. You’re more likely to try to invent a new type of clean fuel if you’re confident you won’t be undercut by cheap gasoline.

We could make pollution more expensive through either a carbon tax or a cap-and-trade system, where companies can buy and sell the right to emit carbon. Where the revenue generated by these programs goes is not as important as the market signal sent by the price itself. Many economists argue that the money should be returned to consumers or businesses to cover the resulting increase in prices, although others believe it should be reinvested in R&D and other incentives to help solve climate change.

The biggest impact will come from putting a price on carbon on the national level, although state and local governments can play a big role too. States can test policies like carbon pricing before we implement them across the country. And they can join together in regional alliances, the way some states in the northeastern U.S. have done with a cap-and-trade program to lower emissions.

Governments must take the lead if we’re going to lower the Green Premiums, but there are things you can do as an individual to help too. You can use your purchasing power as a consumer to buy green alternatives, which sends a signal to companies that there is a market for these products. You can also use your voice as a citizen to urge your elected officials to take the steps I outlined above. (You can read more about what you can do to fight climate change here.)

You’re going to hear me talk about Green Premiums a lot in the months and years to come, because addressing them is the single most important thing we can do to avoid a climate disaster. And I’ll be doing more than talking: this will be a central part of the work we do at Breakthrough Energy, my organization dedicated to accelerating the clean energy transition. So, the next time someone asks you what they can do to fight climate change, I hope you tell them: Do whatever you can to lower the Green Premiums.