Domestic violence is, in many ways, a quiet epidemic. Though in plain sight, victims are often invisible, fearfully denying their situation and hiding behind the facade of a happy home. But the statistics reveal a shocking reality. Every nine seconds, a woman in America is assaulted or beaten, according to the National Coalition Against Domestic Violence. A mind-boggling one in three women (and one in four men) has been a victim of physical brutality by an intimate partner, the group also reports. That makes intimate partner violence “the single greatest cause of injury to women,” per the Domestic Violence Intervention Program.

Hard to imagine the scope we’re talking about? Consider this: The number of women killed by a current or former male partner added up to nearly double the soldier lives lost in war in Afghanistan and Iraq during the same 11-year time frame, The Huffington Post calculated last year. 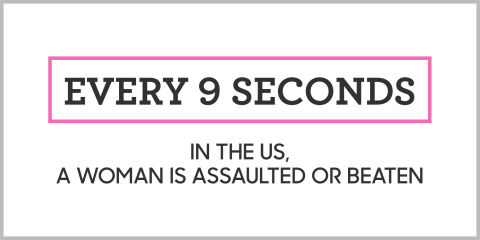 “Domestic violence is an epidemic, no matter what statistic you look at, yet as a society we often close our eyes to it,” Amy Sanchez, director of Break The Cycle, an organization on the NO MORE steering committee, tells GoodHousekeeping.com.

And although the rate of family violence in the U.S. has slightly decreased during the last 10 years, there are “millions of women and children that we know are living in violent homes every day,” Sanchez notes. “If we had a health issue that we knew was affecting millions of people, we’d work together to figure it out, like with what’s been done to address smoking and heart disease. But because this is a ‘private’ issue, a ‘family matter,’ people don’t talk about it.”

In an effort to topple that taboo, GoodHouskeeping.com pulled together a slew of surprising statistics on the subject — and the data is eye-opening. 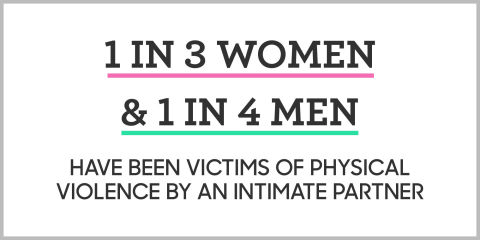 The uncomfortable truth? The majority of marriages will include some violence. The Domestic Violence Intervention Program (DVIP) reports that the FBI “estimates violence will occur during the course of two-thirds of all marriages.”

Occupation, income level, urban or suburban environment — studies show that none of these factors is an indicator of more or less incidents of domestic abuse. When it comes to racial divide, there is no difference either. “White, Black and Hispanic women all incur about the same rates of violence committed by an intimate partner,” according to the DVIP. As far as pinning down which U.S. states have the highest rates of domestic violence, one report identifies Alaska as the worst — and includes Maine, New Mexico, Texas, Rhode Island, Wisconsin and Vermont on the list — but notes that varying criteria by state makes a definitive ranking impossible. 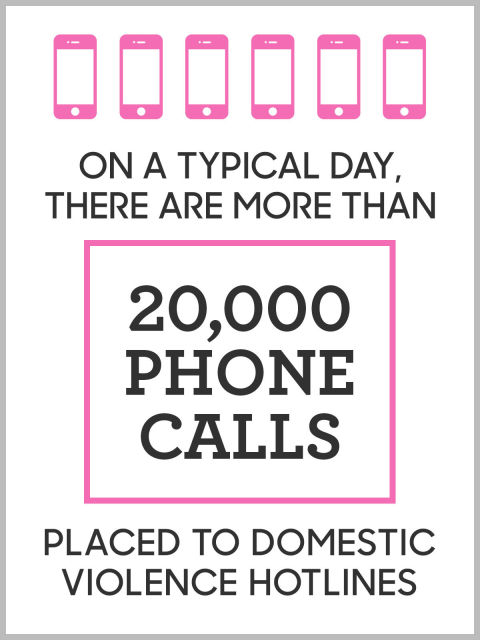 Ironically, it’s the incredible pervasiveness of the violence that Deborah Tucker of the National Center on Domestic and Sexual Violence says keeps people in denial. “Many don’t want to acknowledge it because it leads to understanding more than they want to face,” she explains. “They want to label it a lot of times as a sort of ‘low-life’ problem: ‘It must be people who are uneducated and disadvantaged,’ which is just a way to distance yourself and feel like that won’t happen to people in your class, in your neighborhood. It’s self-protection. But it’s everywhere and that’s really hard to accept.”

Women between 25 and 34 are reportedly the most vulnerable to partner violence. And while 85% of domestic abuse victims are women, the U.S. Department of Justice’s 2000 National Violence Against Women Survey‘s findings suggest that women’s experiences are hardly equal: “Lesbian couples experience less intimate partner violence than do heterosexual couples.”

And on the flip side, men who endure domestic abuse living with male intimate partners are the most victimized male group. Nearly double the percent of cohabitating men reported “being raped, physically assaulted and/or stalked by a male cohabitant” compared to those residing with, or married to, women. 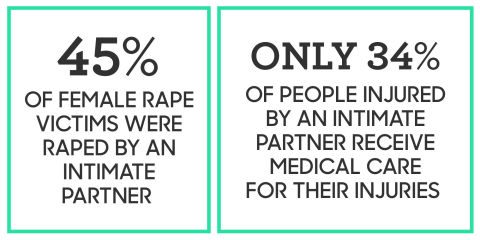 Only 34% of people who are injured by intimate partners receive medical care for their injuries  — and even fewer get law enforcement involved. (Just 25% of “physical assaults perpetrated against women are reported to the police annually,” the National Violence Against Women Survey reveals). “I’ve seen women go a week with a serious injury before getting help,” shares the National Center on Domestic and Sexual Violence‘s Deborah Tucker.

Why? Many fear triggering an attacker’s anger or having a plan to flee foiled. And it’s no wonder: “Women are 70 times more likely to be killed in the two weeks after leaving than at any other time during the relationship,” the Domestic Violence Intervention Program reports.

This is especially true for the spouses of law enforcement. Multiple studies have found that 24-40% of police officer families experience domestic violence (in contrast to 10% of families in the general population). Not only are the abusers’ friends and colleagues the very people victims would turn to for help, but the abuser is also trained to use a gun, which increases the risk of homicide by 500%.

And for the half of women who do manage to leave abusive partners, it’s no easy feat. An estimated 98% of abused women also experience “financial abuse,” in which their partner controls all of the money, and between 21% and 60% of domestic violence victims lose their jobs due to issues that their abuse caused. So they may escape — but with no income and no financial resources.

Then there’s the where-to-go problem: The third leading cause of homelessness among families is domestic violence, according to the National Coalition for the Homelessnesss. “We hear as advocates over and over, ‘Why doesn’t she just leave?'” says Sanchez. “But when you look at all of the things that are barriers to leaving it becomes clear there are so many reasons. What we really need to be asking is, ‘Why does the abuse keep happening?'” 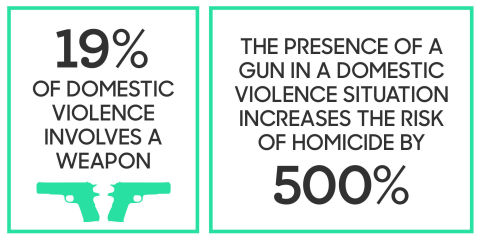 HOW THE CYCLE CONTINUES

This plague perpetuates itself. Each year, 10 million children are exposed to domestic violence — which the Centers for Disease Control and Prevention has declared a “serious, preventable public health problem” — according to The Center for Women and Families. And of the 1 in 15 kids exposed to it, a heartbreaking 90% are eyewitnesses, who will feel the effect of it for their entire lives. 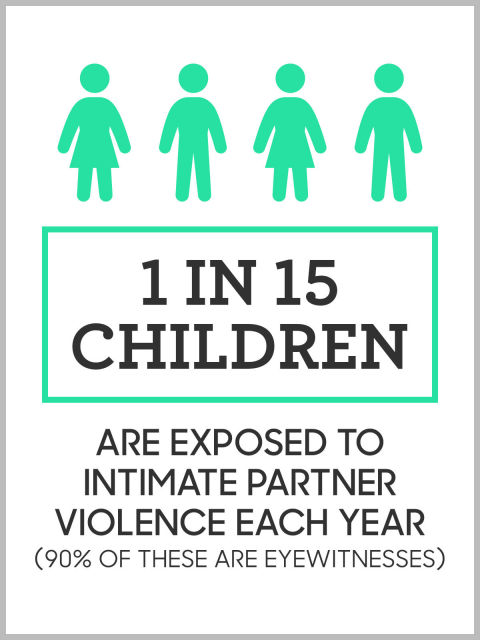 The World Health Organization reports that globally, men who were exposed to domestic violence as children are three to four times more likely to perpetrate intimate partner violence as adults than men who did not. “Young people who are living in violent homes are six times more likely to attempt suicide,” adds Sanchez. An estimated half of these men choose not to perpetuate the problem or take their own lives, but they still often suffer too — in personal relationships, she explains, “because the adult didn’t learn healthy relationships as a child … or critically important trust and respect.”

While there are laws in place about domestic violence, Sanchez says that’s not sufficient. “We haven’t shifted the behaviors toward it that convey it’s okay to beat up your girlfriend.” (In fact, almost 1 in 5 female high school students reports being physically or sexually abused by a dating partner, The Center for Women and Families has found).

The key, Sanchez adds, is changing people’s attitudes: “People need to understand that it is everybody’s business — not just that of the cops, the judges alone. We all have an obligation to take this on.” Pointing to the shifts that she says our culture has seen towards smoking and recycling in recent decades, “Thirty years ago, it was culturally appropriate to smoke wherever you were, at home, on the job,” explains Sanchez. “Now, it’s against the law and it’s culturally inappropriate. We shifted norms and behaviors. It’s the same thing with recycling. Growing up, I remember we didn’t think twice about throwing garbage out the window of a moving car on the highway. Today we’ve changed our behavior, our values, and people recycle. That’s what we’re trying to change now with respect to domestic violence. We know how to do this.”

How do you build a smart city? Japanese town shows the way

Which are the world’s most polluted cities?